Story for kids “The Bear and the Squirrel”

In our class of Language, our teacher Pilar, told us to write a story for kids in groups of three or pairs. I worked with Gonzalo and Benjamin. Here is our work:

It was a sunny afternoon at the Yosemite National Park, not one cloud in the sky and the smell of fresh pine trees and nature filled the air. A large brown bear was peering into the river, hoping for a fish to hunt in mid-air. And that time of the day came when the bear gave up and hoped for a better day after a good night sleep.

Following his own trail to his cave, the bear glanced around the pine trees and he joyfully noticed a beehive. Brown bears love honey, especially when they haven’t eaten after hunting for a while. He approached the tree and look for a way to climb up or make it fall to the ground.

Suddenly, he noticed a squirrel coming towards the tree, looking up at the beehive. The brown bear caught the squirrel’s reaction and growled at the innocent creature:

The squirrel didn’t say a word and left the tree, he was frightened. The bear kept trying to reach the hive any way possible but couldn’t achieve his goal. He struggled to climb up the pine, he weighed too much. But he didn’t want to give up. It was getting dark so he rushed to the cave and decided to get up early and get his reward first thing in the morning.

The day after, the squirrel went with the bear again. Once more, the bear was trying to tumble the beehive. Then the squirrel noticed that a fox was prowling slowly in between the long grass. The squirrel quickly dashed towards the tree and climbed it. Then he realised that if he helped the bear to get the beehive, the bear could help him to get rid of the fox.

In a flash, the squirrel cut out the beehive from the tree.

“What have you done?” Said the bear. “Why did you help me after all I did to you?”

“I wanted to help from the start. You shouldn’t judge an animal by it’s appearance.”

“I don’t understand, I thought that you wanted to take the honey from me” said the bear.

“I don’t eat honey, I eat nuts”, said the squirrel.

“Well… from now on, I won’t threatened you again” the bait said.

“Now that we are friends, can you look behind you and help me with that?” said the squirrel.

The bear turned around and saw the sly fox. He ran towards the fox with the purpose of scaring him. He groaned at him. The fox fled and vanished in a second. The bear and the squirrel became friends forever, helping each other always they had a problem. 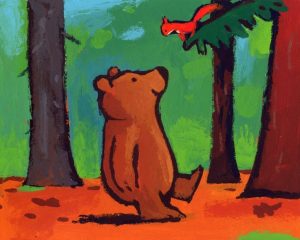