In the History hour we did this Lino with our partner I did it with Chivy.

1. This Lino contains: The Alliances in WW1, Arms and Naval Race, Murder in Sarajevo, First and Second Morocco Crisis and Balkans First Crisis.

2. It is very important because in this video says how the murder in Sarajevo leads to the WW1 and all gets to a domino effect with the alliances, causes, etc…

In our history class Lenny told us to do a plan for the essay and then the essay. 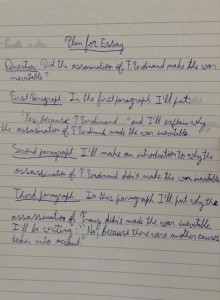 Then I did this essay:

Question: Did the assassination of F. Ferdinand make the war inevitable?

There are two answers to this question, one that affirms that the

assassination of Franz Ferdinand was the straw that broke the camel’s back. The

camel’s back. Well, it was the final straw. The argument in the essay question is

related to the inevitability of war, not the one of the final straw.

As I told before, there are two answers to this question.In this paragraph I will talk

about the affirmative one. This was the last cause, so this was taken into account

because F. Ferdinand was the heir of Franz Joseph I, Emperor of Austria-Hungary,

which was part of the Triple Alliance. The murder happened in Sarajevo (Bosnia) but

he was executed by a Serbian nationalist group. It was an injury that the emperor

was not willing to forgive. He decided to punish Serbia and declared war. As Russia

protected Serbia, he mobilized his troops. Thus began the war. Because of

defensive commitments, including members of the Triple Entente and the Triple

Therefore the assassination de F. Ferdinand was the last straw that broke the

In this paragraph I will talk about the denied answer??. This was not taken into

Ferdinand happened. So if it wasn’t Ferdinand’s murder the straw that broke the

camel’s back, another cause would be that straw.?? That straw could be: After the

Franco-Prussian war (1870) the occupation of Alsace-Lorraine, for Germany, was a

very powerful industrially speaking state, woke up France to get it back. The

European countries were afraid of being attacked, so they prepared with: “Defensive”

alliances: The Triple Alliance (Germany) and the Triple Entente (France) made

plans for war. Also a race was started to have the best navy and army. This could be

a signal that the countries were preparing for war. Another cause would be the

to analyse these events. This could be a chance of different countries involved in the

alliances fighting to get the land that it wasn’t occupied by a powerful country.

We should look back on some key concepts of essay writing. We’ll discuss this in class.